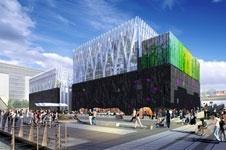 The developer and bank behind the terminated £1.5bn Silvertown Quays mixed-use project are preparing to sue the London Development Agency for the £60m spent on working up the scheme.

Sources close to the developer, Silvertown Quays Ltd, said it would challenge this week’s decision by the LDA to terminate its eight-year-old agreement with the firm.

It is thought that the Bank of Scotland, one of the scheme’s backers, is preparing to do likewise. A separate source said it was considering “all options”. The bank declined to comment.

Building can also reveal that the LDA is working up plans to use the 24ha east London site as a temporary exhibition space during the Olympics; many events are to be held at the adjacent ExCel exhibition centre.

The LDA this week said it “could not accept” revised proposals for the 4,900-home scheme after discussions with Silvertown Quays Ltd and its backers KUD International, part of the US division of Japanese company Kajima, and the Bank of Scotland.

The developer has been in talks in recent months with housebuilder Barratt and developer British Land to move the scheme forward. However the LDA, which owns the site, is thought to have grown frustrated at the developer’s inability to start work.

David Taylor, the former chief executive of English Partnerships, is chairman of Silvertown Quays Ltd. He said he was “absolutely astonished” the LDA had decided to reject a revised bid to take on the development.

He said: “It seems almost unbelievable that the LDA should reject these positive proposals out of hand. Rebuffing Britain’s largest housebuilder in joint venture with one of the country’s most respected commercial developers almost beggars belief.”

Outline planning permission for the scheme, granted in April 2007, was due to expire in April this year.

The LDA, which owns the land for the site, has in recent months been working instead with local council Newham on creating overspill exhibition space in time for the 2012 Games on the site. This will include a new bridge over the quay between the site and the ExCel centre.

The scheme was to have included an £80m aquarium designed by Terry Farrell & Partners, which would have been paid for out of the profits from the sale of homes.