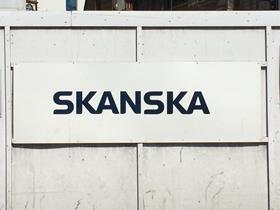 Skanksa has warned investors it expects a weak UK construction market in the face of Brexit as the firm confirmed a £36m loss for its European construction arm in 2018.

Skanska said it was expecting a slow year for the UK construction market – weaker than in the any other country it operates in.

Its annual report notes: “In the UK the uncertainty related to Brexit is limiting investments in the non-residential building market.”

The warning came as Skanska revealed its construction turnover had increased by 5% last year, to SEK 158bn (£13bn), while operating income fell 9% from 2017.

The figure comes after an £87m loss on European construction in 2017.

Anders Danielsson, chief executive of Skanska, said: “For construction, 2018 was a disappointing year.”

“[But our] operating margin in construction in the fourth quarter was 2% and we expect strategic initiatives to further improve profitability during 2019.”

Last month Building revealed that Skanska’s up for sale UK piling arm is still up for grabs after the frontrunner to buy the firm withdrew from the sale after judging the £55m asking price to be too high.

London concrete frames specialist Morrisroe, headed up by company founder Brian Morrisroe, was tipped to buy the 300-strong Cementation business at the end of November.

But it is now understood to have told Skanska that the Swedish contractor wants too much for the business.

It is believed that despite bidding more than half the asking price, Morrisroe’s offer was still “millions” short of what Skanska values the business at.