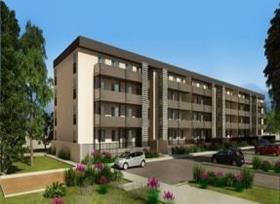 A UK solar developer has announced a £1.1bn deal with a Chinese building materials giant to build 8,000 affordable zero carbon homes in the UK.

WElink Energy, a solar firm which has offices across the world including in the UK and Ireland, says it will work with China National Building Materials (CNBM) – a Fortune Global 500 company – to develop and build modular energy efficient homes in sites across the UK.

A start date for the second phase has not yet been announced.

Speaking to Building, WElink Energy chairman Ajmal Rahman said the firm is in the “process of acquiring sites” and said further announcements on locations will be made shortly.

The zero carbon project is the solar firm’s first foray into housebuilding, and Rahman said: “We will partner with people along the way to help us build the homes, but not traditional housebuilders. This is a different solution.”

Rahman added that the component parts of the homes – which will be apartment blocks up to four storeys high and will contain two or three bedroom flats – will be built in a factory close to the development, and then assembled on-site.

He added: “They’re modular homes, built to factory standards, to meet the more ambitious targets of affordable housing. There’s also no cement and no water usage, so there’s zero waste.”

British Solar Renewables have been awarded a contract to supply and install roof-top solar panels and energy storage components on the homes.

In a statement announcing the deal, CEO of WElink, Barry O’Neill, said that given the “engineering, financial and strategic support of our Chinese partners”, the firm will be able to “expand rapidly to fulfil the appetite for the development of affordable housing in the UK.”