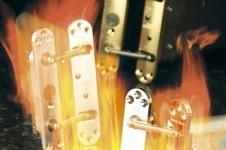 Southwark council has confirmed the fire that ripped through a block of flats in Peckham early this morning was started on a neighbouring housing development.

Nobody was killed in the blaze but several hundred people were evacuated and there are 10 reported casualties, most suffering the effects of smoke inhalation.

The scheme was for 39 units and the developer that applied for planning permission is called Trafalgar London. A council statement said: “The developers chose to use approved inspectors for dealing with the building regulations.”

It added: “We understand that because the fire started on a building site, that this incident will also be investigated by the Health and Safety Executive.”

A total of 125 fire fighters were called to the scene at 4.26 this morning to tackle the blaze, which broke out in Sumner Road.

An eyewitness told Building: “A block of flats was demolished six months ago and they were about 50% of the way through the rebuild. This whole area is council flats. I was woken up at 4.30 by an explosion. There were about 12 in total. I think it was gas canisters.”

The two blocks in neighbouring Carisbrooke Gardens were damaged by fire and the council is making arrangements for emergency accommodation.

The fire is currently being damped down.

In July six people were killed in a fire that tore through a block of flats in nearby Camberwell.