HS2 has approved the use of project bank accounts across key contracts on phase one to help protect its supply chain.

Groups representing specialist contractors and smaller businesses immediately hailed the move and said it would provide greater protection for firms against the risk of insolvency. 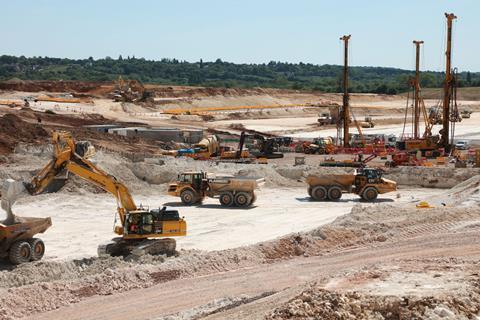 Following a successful trial of project bank accounts (PBAs) on two enabling works contracts, HS2 is now working with its construction contractors to implement these across existing and future contracts.

The two trial schemes were the Costain/Skanska job for enabling works south of the M25 and the work being carried out by the Fusion JV, made up of Morgan Sindall, Bam Nuttall and Ferrovial between Gerrards Cross, Buckinghamshire, and Leamington Spa in Warwickshire.

HS2 said given the increased economic uncertainty stemming from the covid-19 pandemic, PBAs would provide greater certainty and assurance for smaller companies working on the job.

In May, the railway announced it was implementing faster payments in response to the pandemic.

Trevor Hursthouse, the chairman of the SEC group, which has been campaigning for public bodies to use PBAs, for more than a decade said: "I’m delighted with HS2’s stance. Using project bank accounts will safeguard prompt payment and furthermore guarantee security of payment across the supply chain which is particularly important during these times.”

And Mike Cherry, National Chairman of the Federation of Small Businesses, said the move would give more confidence to smaller firms to bid for some of the upcoming jobs.

He said: "For many small businesses, the fear of being part of a project where late payments leave them out of pocket is a very real, very harsh reality. PBAs allow them to get involved safe in the knowledge that no matter what happens, they will be paid – and paid on time.”

PBAs enable payments to be made directly to firms in the supply chain with payments made within 15 days.

By the end of this year, £20bn worth of work from Highways England will have been paid through PBAs and the Environment Agency has currently almost 120 projects that are using PBAs.

HS2 projects that will use project bank accounts