When is the Spurs stadium due to open? Building reveals what we know about the Tottenham stadium delay 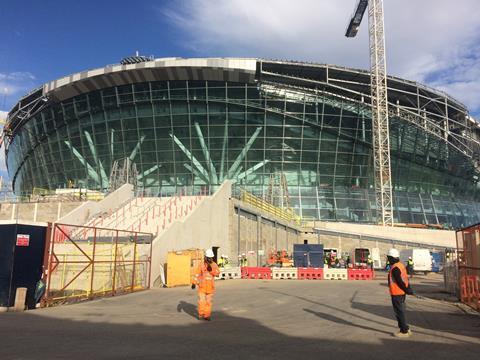 Six months after Spurs’ stadium was due to open there is finally a clear picture of when the new facility will be finished.

With the club pushing contractor Mace to complete the job, there have been plenty of questions around how and why Tottenham’s new stadium is not finished yet.

Take a look at what we know so far.

When was the stadium due to open?

The stadium was originally due to open for Spurs’ first home game of the year against Liverpool on 15 September. But on 13 August, the club announced that the facility would not be ready for the match.

Who’s to blame for the delay?

On 22 August Mace blamed the delay on faulty wiring, with chief executive Mark Reynolds telling Building the firm had discovered problems with the wiring for fire detection systems during commissioning and testing work. In an update to fans on 9 October, Spurs chairman Daniel Levy said the delay was due to  “several contractors”.

Building understands that around 12,000 fire alarms had to be checked.

How the delay has unfolded

3 April 2019: Finishing touches continue at the stadium as it hosts its first official game. The club opens it doors to reporters, showing off features which include a hanging nightclub space and an entire brewery.

17 March 2019: After the completion of the FA Cup quarter final matches, Tottenham confirmed that its first game in its new stadium would be a Premier League match against Crystal Palace on Wednesday 3 April.

12 March 2019: Uefa says a final decision on where Spurs will play its Champions League quarter final will be made after the draw has taken place on 15 March.

8 March 2019: Tottenham Hotspur reveals its new stadium will finally be ready to host a competitive fixture in the first week of April.

7 March 2019: Asked whether Spurs would be allowed to play its quarter final at its new ground, Uefa tells Building it remains “in close contact with Tottenham Hotspur to assess the possibility of the club hosting UEFA competition matches in their new stadium this season”.

7 February 2019: In another update on the late-running scheme’s progress, Spurs says the 62,000-seat ground would not be ready in time to host its fixture against north London rivals Arsenal on 2 March.

24 January 2019: Brent council grants Tottenham Hotspur permission to increase capacity at its temporary home, Wembley Stadium, for eight games between now and the end of the season as the north London club awaits the long-overdue completion of its new White Hart Lane ground.

10 January 2019: Uefa says its possibile that Tottenham Hotspur might still be able to play Champions League fixtures at its new home this season.

9 January 2019: Spurs concede that its Champions League game against Borussia Dortmund in February will be played at Wembley Stadium as its new stadium won’t be ready until March at the earliest.

13 December 2018: Spurs admits its new stadium will not be ready for its game against Manchester United on 13 January – with the club still saying it doesn’t know when the ground will open.

21 November 2018: Wembley stadium reveals more details of Spurs’ contingency plans in case the stadium is not ready on time

12 November 2018:  Building reports that club targeting game on 13 January against Manchester United as its first at new ground

11 November 2018: Spurs strikes deal to use Wembley stadium for the rest of the season as a fallback in case of more delays

17 October 2018: As delay drags on into second month, Mace says construction management route was “only viable” one to build the new Tottenham stadium. It originally won the job under a fixed-price deal

15 September 2018: Original date of stadium opening against Liverpool. Spurs play game at Wembley instead and lose 2-1

3 September 2018: Club says home Champions League games will be played at its temporary Wembley Stadium home. Spurs also announce home league game against Manchester City will be played at Wembley and moved back a day to 29 October

22 August 2018: Mace says faulty wiring is behind the delay

How much is it all going to cost?

The stadium was originally expected to cost around £400m. On 9 October, Levy admitted the costs of the 62,000-seat stadium “had definitely risen”. There is now speculation that the price tag of the north London ground is now north of £800m and closer to £875m.

When is the stadium now due to open?

Tottenham’s first match at its new stadium will be against Crystal Palace in the Premier League on Wednesday 3 April. It has also confirmed that its Champions League quarter final first leg against Manchester City on Tuesday 9 April would also be held at the new stadium.

But Daniel Levy himself admitted he doesn’t know throughout the six-month delay. “I wish I was able to confirm an exact opening date and fixture,” he told fans at the end October.

For a long time the best guess was that the club was aiming to be ready for Manchester United on 13 January, but the club confirmed on 13 December that the Man Utd fixture had been switched to Wembley.

The club later was forced to concede that its Champions League game against Borussia Dortmund in February would be played at Wembley Stadium as its new stadium wouldn’t be ready until March at the earliest.