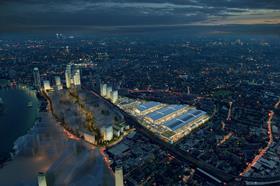 The regeneration and development specialist also reported an increase in revenue to £150m for the period, up from £110m.

St Modwen’s chief executive, Bill Oliver, attributed the bumper results to the “growth in the UK property sector”, and the firm’s three major projects “reaching significant milestones in the period”.

This week St Modwen appointed DBK as independent certifier on the first phase of the New Covent Garden Market project.

St Modwen has also been selected as development manager for the Defence Infastructure Organisation for the redevelopment of MOD Ashchurch in Gloucestershire into a mixed-use community with 2,100 homes.

The Bay Campus development at Swansea University will welcome its first students in September.