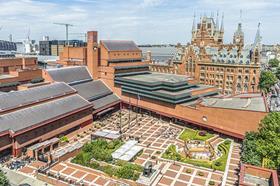 A team featuring developer Stanhope and architect Rogers Stirk Harbour & Partners has been confirmed to extend the British Library on London’s Euston Road.

The scheme will see a further 100,000 sq ft of space added on a site just north of the grade I listed building.

Work will include building a new entrance close to the nearby Francis Crick Institute – completed by Laing O’Rourke last year – and the main concourse for St Pancras railway station.

The development will also include space for firms that want to relocate to the area which is being branded as London’s Knowledge Quarter and centred on the life sciences sector. It will also include a permanent home for the Alan Turing Institute – the UK’s national centre for data science.

Currently the library (pictured) is home to five public floors with 11 reading rooms which surround a central tower holding an estimated 14 million books – including original versions of the Magna Carta and artwork by James Joyce.

The Treasury and the Department for Culture Media and Sport have already approved the business case for the work with a development agreement due to be finalised with Stanhope this summer. Design work is then expected to be completed by the end of 2018.

British Library chief executive Roly Keating said: “This new partnership will help us to preserve and respect its unique character while creating much-needed extra space both for our growing public audiences and the dynamic research communities in London’s Knowledge Quarter.”

Among the schemes Stanhope is currently working is the redevelopment of the BBC Television Centre in west London while double Stirling Prize winner RSHP worked on the extension of the British Museum which was completed three years ago.