RSHP scheme stalled by negotiations around planned Crossrail 2 station nearby 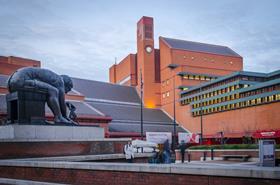 A Stanhope-led JV has agreed to develop a grade I-listed building for the British Library after negotiations were prolonged by months because of proposals for a Crossrail 2 ‘mega-station’ on the same site.

The library has long been planning to develop 100,000ft2 of exhibition, library, office and commercial space on a 2.8-acre patch to the north of its main campus.

But work has been held up after the British Library admitted negotiations “involved a need to react to, and deal with, Transport for London’s emerging requirements for the Crossrail 2 infrastructure to be delivered as part of the development”.

The project proposes a new station, Euston-St Pancras, formed by merging the current St Pancras and Euston stations. The station would instantly become the largest in London by passenger volumes and have more lines travelling through it than any other.

The contract between the British Library and SMBL now involves a provision for £40m-£60m of work relating to Crossrail 2, including for infrastructure between concourse and tunnel level. But it also contains an agreement on sharing cash if Crossrail 2 never happens.

The development agreement struck by SMBL and the British Library is set to be formally announced in the coming weeks.

A spokesperson for Stanhope confirmed SMBL has not appointed a contractor to work onsite. Stanhope and the British Library both declined to comment on the construction timetable.

Stanhope and Mitsui worked together on the £200m scheme to turn the former BBC television centre in White City into new shops, offices and apartments. The work was carried out by Mace and finished last year.