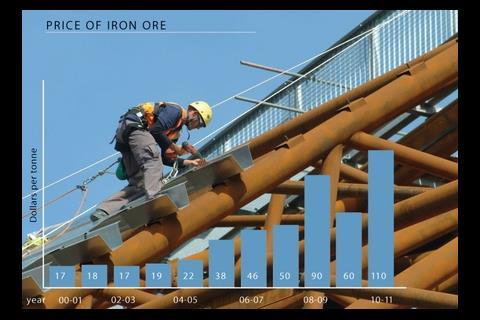 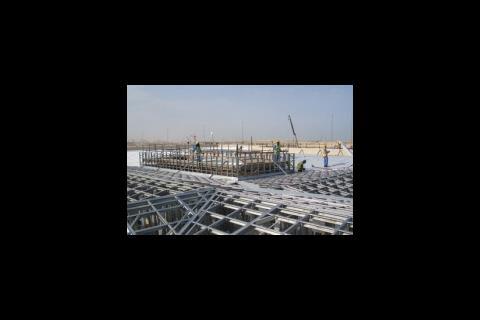 UK set to link the price of steel to quarterly index, which almost doubled last month

An expected recovery in the new build office market is in jeopardy as a new iron ore pricing system threatens steel prices.

Analysts have warned that the cost of steel could rise by about 30% after Japanese and Chinese steel firms agreed to pay major mining companies nearly double the previous benchmark price for iron ore last week. The UK is expected to follow suit.

Noble Francis, economics director at the Construction Products Association, said: “Steel producers have two major costs – energy and iron ore – so this will have a definite impact on the price of steel. Producers may pass on 20-30% of the price rise.

“Unfortunately a lot of steel tends to be used in offices, a market that has suffered particularly badly in the recession. It’s unlikely to affect projects that are under way, but it could slow the sector’s recovery, which was expected next year. If the Cheese Grater [122 Leadenhall Street, City of London] comes back, that might be the kind of project affected.”

Under the new system, the price of ore will be set quarterly and linked to the iron ore spot market, rather than an annual price agreed through negotiation as before. A price of $110 per tonne has been set for April to June, up from $60 per tonne under the previous system. British steel firms have yet to agree to the new pricing system, but when they do it will be backdated to 1 April.

Speculating on the eventual price of iron ore for British firms, Peter Fish, managing director of steel industry analyst MEPS, said: “History tells us that when one price level is agreed, the rest of the world follows, so the price for British steel firms is likely to be very close to $110.”

Nick Pollard, chief executive of Bovis Lend Lease, said: “We have factored in the price rise, but you need that sort of intelligent view to extend to discussions with QSs and clients.” On the plus side, he added that the linkage to the spot market would result in greater visibility on pricing.

Another construction boss said: “It hopefully won’t affect commercial jobs too much because cost rises will be offset by the likely increase in property values as the world comes out of recession. Where there may be some tension is in the public sector, where cost rises may have to be offset in different ways, such as re-scoping.”

Alastair Stewart, an analyst at Investec, said: “A sensible contractor would have set up cost-plus arrangements so it could pass on the cost to a client. But further along that could affect the volume of work coming through. Also, with oil prices at an 18-month high, there is an argument this is a greater threat.

“Either way, it’s clear build cost inflation is back on the agenda.”