Stirling work for Morrison and Robertson 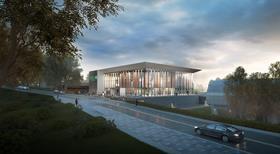 The University of Stirling has awarded Morrison Construction and Robertson contracts to carry out two separate jobs on its campus.

The £20m project, which was designed by Faulkner Browns Architects, was recently granted planning permission by Stirling council.

The 6,064m2 facility (pictured) will include a new entrance and reception, cafe and various gym and sports facilities.

It will also include a sports science lab and connections with both the exisiting swimming pool and surrounding natural features including a nearby loch.

Faithful & Gould is project manager and principal designer, while Harley Haddow is the M&E engineer.

Buro Happold is the fire engineer and Woolgar Hunter is acting as a structural engineer.

Meanwhile, Robertson Construction will carry out work at the university’s central building.

The Campus Central project will include around 2,285m2 of refurbishment works to the existing atrium area in the Andrew Miller Building and a linked three-storey extension of around 3,215m2.

Gleeds is project manager and principal designer, while Page/Park is the architect.