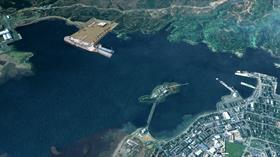 Stornoway Port Authority is tendering for the design of a deep water berth so that the town on the Isle of Lewis in the Western Isles can host larger cruise ships.

The design is due to be completed by May, with construction work scheduled to start at the end of next year for a June 2021 finish.

Stornoway hosted 43 cruise ships in 2017 but only very few of these were larger boats.

Cruises ships over 156m long are currently unable to berth in the harbour and so are forced to anchor and bring people ashore in smaller vessels.

But under the new proposals, Stornoway will be able to berth ships up to 350m long. The Stornoway Port Authority estimates an additional 35-40 vessels will be attracted a year, boosting visitor numbers and the local economy.

Stornoway Port Authority chief executive, Alex Macleod, said: “Whilst the work on the design continues, we will work with a number of agencies, including the Scottish government, to investigate and source ways to fund the project.”

Bidders for the contract must submit their application to the authority by 14 September, with the winner being awarded the following month.