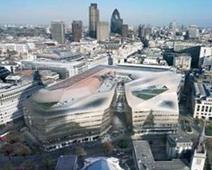 T Clarke was electrical contractor on the One New Change scheme

Building services contractor T Clarke has reported a 76% fall in pre-tax profit in 2012 despite revenue growing 5.5%.

This result came despite a rise in revenue to £194m from £184m over the period.

However, T Clarke Scotland also reported a decline in revenue to £15m from £17m.

Mark Lawrence, chief executive, of T Clarke said it was a “solid performance”

He added: “It is reassuring for our shareholders as well as the clients and the contractors that we work with that we continue to be financially strong, and that our reputation for delivery is rock solid.”

Russell Race, chair of T Clarke, said he expected the business to continue to face “fierce competition” for workload and “continued margin pressure” in 2013.

He added: “The board remains confident in the resilience of the business and we believe the group will continue to improve and benefit from the wider range of services that we offer to our clients.

“Our excellent operational capabilities and financial strength support our strategy and continue to differentiate T Clarke from its competitors and will underpin long-term growth.”