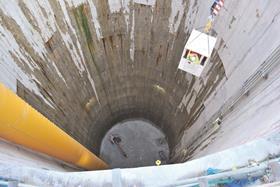 Thames Water has confirmed the winners of the main construction packages for the £4.2bn Thames Tideway Tunnel, kickstarting a eight-year construction programme.

Morgan Sindall, Balfour Beatty, Bam, Costain and Laing O’Rourke are among the winners confirmed for the behemoth 25km ‘super sewer’.

Contracts have been inked following Thames Water’s selection of an investment partner - the Bazalgette consortium - last month to fund £1bn of the project’s cost.

Preferred bidders were first selected in February by Thames Water and the contracts have now been novated to the Bazalgette consortium, made up of investors INPP, Allianz, Amber Infrastructure Group, Dalmore Capital Limited, DIF and Swiss Life Asset Managers.

The work packages for the super sewer have been split into three geographic sections of west, central, and east.

A joint venture between Morgan Sindall, Balfour Beatty and Bam has been appointed to deliver the west section of the tunnel worth £416m.

The central section has been awarded to a team comprised of Ferrovial Agroman UK Ltd and Laing O’Rourke Construction, and a JV headed by Costain, Vinci and Bachy Soletanche has awarded the £605m contract for the East works package.

The 25km-tunnel will run from Acton in the west of London through to Abbey Mills in the east. The construction programme is scheduled to run from 2016 to 2023.

The Thames Tideway Tunnel will be the biggest infrastructure project ever under taken by the UK water industry. It will create more than 4,000 direct and indirect jobs at the peak of construction.

Balfour Beatty said it would utilise BIM on its section of the works “allow full testing and simulation of construction activity before works start on site for safe and efficient delivery”.

The firm added that project materials will be transported down the River Thames to ease road congestion, emissions and disruption throughout the duration of the project.