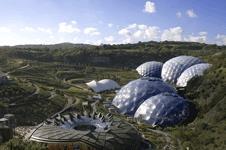 This was the decade of the “iconic” towers, sustainable homes and very big infrastructure schemes. Here’s our top six, in order of merit

This Cornish scheme was conceived by Tim Smit, a drop-out musician-turned-historic garden restorer. It didn’t necessarily bode well, but against the odds Eden became the best of the Millennium buildings. Architect Nicholas Grimshaw & Partners’ design was spectacular, thanks to the instantly recognisable domed biomes and innovative use of ETFE panels. There was also an added twist to the project team – the £80m contract was awarded to a joint venture between Alfred McAlpine and Sir Robert McAlpine, the first partnership between the two since they split in 1940.

Norman Foster’s finest contribution to the City skyline, 30 St Mary Axe, is much more than an unusually shaped tower. The building, which was also a triumph for Skanska, has won over London to tall buildings.

With this project, the UK rail network has a fine gateway to Europe. The £800m station refurbishment, which was formed by the conversion of its decrepit, 139-year predecessor, was a masterpiece of engineering. The initial design was by Nick Derbyshire of British Rail, which was developed by Foster + Partners. It managed to slot 21st-century transport and retail facilities into the famous Barlow shed without arousing the ire of English Heritage in the process. The 108km high-speed line from London to the British end of the tunnel finished in 2007.

Peabody’s BedZed scheme was the project that first got the nation talking seriously about zero carbon homes back in 2000. Without any of the pressure of the government legislation and guidelines that were to come in the years following its creation, the visionary project paved the way for many of the technologies we take for granted today.

The sheer scale of Richard Rogers’ design made it a mind-blowing feat of construction. But the project’s credentials are also owing to the manner in which it was built: the pioneering T5 agreement, which created a whole new framework for projects, epitomised the Egan agenda like no other before or since.

2006 was a tale of two stadiums for the UK construction industry – and this one got it right. The £275m venue, the Emirates stadium, was completed by Sir Robert McAlpine on time and under budget. More than £35m of extra works were incorporated during its construction.

Before Christmas we asked readers to decide on the best and worst buildings of the decade and now we can reveal that the Gherkin overwhelmingly won the popular vote, with Wembley Stadium receiving the collective thumbs down.

Here’s how the vote broke down: