Trump slams new US embassy after cancelling trip to open it 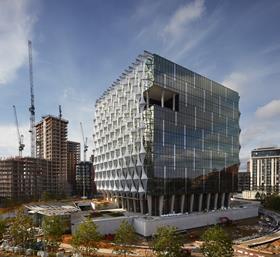 US president Donald Trump has slammed the new US embassy in London as a “bad deal” after cancelling a planned trip to open the $1bn building next month.

Main contractor Sir Robert McAlpine has been working alongside Alabama firm BL Harbert International on the scheme, with the cost funded by the sale of buildings the embassy owns at its former address at Grosvenor Square in Mayfair.

Building had revealed last month that embassy officials were confident the US president would be on hand to cut the ribbon on the new £738m embassy in the Nine Elms area of the capital, with all 800 staff set to move in over the coming days.

It was understood Trump would “most probably” be there for the opening date, or at a date around that time.

Reason I canceled my trip to London is that I am not a big fan of the Obama Administration having sold perhaps the best located and finest embassy in London for “peanuts,” only to build a new one in an off location for 1.2 billion dollars. Bad deal. Wanted me to cut ribbon-NO!

But in a tweet posted earlier today, Trump hit out at the Obama administration for selling the embassy in London for “peanuts” and building it in an “off location”. The US announced plans to relocate the embassy in October 2008 – when George W Bush was still in the White House.

“Reason I cancelled my trip to London is that I am not a big fan of the Obama Administration having sold perhaps the best located and finest embassy in London for ’peanuts’, only to build a new one in an off location for 1.2 billion dollars. Bad deal. Wanted me to cut the ribbon-NO!”

It has been reported the ribbon-cutting ceremony may instead be hosted by US secretary of state Rex Tillerson. Trump’s trip was not the full state visit offered by prime minister Theresa May, for which no date has so far been set.

This is the embassy’s first relocation out of London’s Westminster since it first opened a base in the capital 150 years ago with its grade II listed home, built in 1960 to designs by Finnish architect Eero Saarinen, being turned into a luxury hotel by architect David Chipperfield.

The new 12-storey block is almost a year late with the House Oversight and Government Reform Committee – a House of Representatives spending watchdog – criticising the way scheme was being built at a hearing in December 2015.

Designed by Philadelphia-based Kieran Timberlake, the highly sensitive nature of the US’s diplomatic base in the UK means many of the building’s details are shrouded in secrecy.