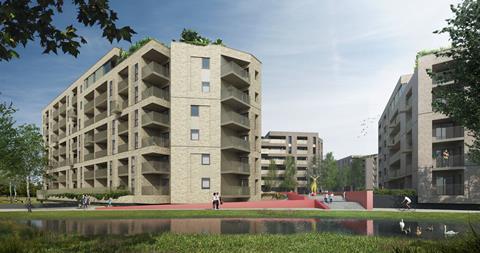 Developer U+I has been granted planning permission for a 660-home mixed-use regen scheme at Victoria Way in Ashford, Kent.

Previously occupied by energy company Powergen in the 1990s, the scheme will see 660 new homes, new public realm and a café built on a brownfield site that has been derelict for over a decade.

The resi units will consist of one, two, and three-bedroom flats and 25 houses.

The developer said a masterplan for another regen project next to Ashford International train station is currently in progress, with that scheme set to provide a 200 homes, a 120-bed hotel, an Aldi store and a new brewery and visitor centre for local wine and beer maker, Chapel Down.

Kirk Pickering, founding partner of Neighbour, said U+I’s scheme in Ashford is the first in a rental pipeline of 1,000 homes it has planned in Kent.

He said his firm will take the “best in class design elements” from similar PRS homes in the US and continental Europe when developing the Ashford apartments.