Developer says mixed-use scheme unlikely to start until after March 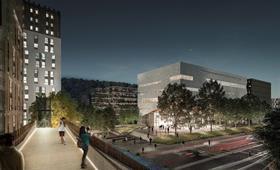 Developer U+I has warned the ongoing delay to its development at Kensington Church Street will mean it won’t be able to report any gain on the scheme in the current financial year.

A joint venture with Brockton Capital, the development will deliver 55 new homes, including 19 affordable units, a medical surgery, office and retail space and was finally given the green light by London mayor Sadiq Khan last September after previous proposals had been refused.

But two months later the Urban Sense-designed scheme was called in by the housing secretary James Brokenshire at the request of the Royal Borough of Kensington & Chelsea, who wanted Khan’s approval reviewed.

With a projected onsite start date not now expected until after the end of March, Matthew Weiner, U+I’s chief executive, described the delay as “frustrating” and said: “Consequently, we do not anticipate including the scheme as a FY19 development and trading gain.”

He added: “However we remain focused on delivering our target £45m-50m development and trading gains for the year. This is subject to our remaining identified projects and some smaller projects completing before year end, as currently expected.”

In a trading update, U+I said gains to date amounted to £30m.

It also announced the sale of residential land at the Preston Barracks site (pictured) in Brighton, Sussex, to Optivo Housing Association. The site, a former military barracks, is being redeveloped under a £300m masterplan drawn up by U+I, Brighton & Hove City Council and the University of Brighton. It will eventually host 369 new homes. Contractors Graham and Henry Construction are working on the scheme.

The firm is expected to publish its results for the year ending February 2019 in April.