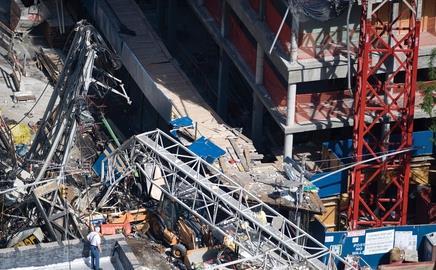 Industry body the Strategic Forum is working with officials in New York to improve tower crane safety after a spate of collapses in the city left nine people dead.

The news emerged in the week that New York suffered its second crane collapse in two months. The crane, made by US manufacturer Kodiak, fell down on 30 May and killed two workers, bringing the number of construction-related fatalities in the US city this year to 15.

A spokesperson for the Strategic Forum said representatives from its tower crane safety group made contact with city officials after a tower crane collapsed in March, killing seven people.

He said: “Hands across the water have been extended. We are discussing the lessons we’ve learned and sharing information on maintenance and operational procedures. Any work we can do or help we can give, we will.”

The Strategic Forum Tower Crane Group was set up in August last year, and is made up of operators, employers and worker representatives. Its creation followed Building’s Safer Skyline campaign, which sought to bring dangerous tower cranes to the industry’s and the public’s attention.

New York is currently in the grip of a public frenzy over tower crane accidents. The New York Department of Buildings recorded 100 complaints about “unsafe and illegal” tower cranes in April, almost double the number of average complaints before the March accident. Mayor Michael Bloomberg recently pledged to spend $5m (£2.7m) recruiting 63 more health and safety inspectors for the city. Meanwhile, five sites across Manhattan had stopped work as Building went to press, as officials investigated last Friday’s incident.

None are understood to be employing British companies, but UK contractors Bovis Lend Lease and Balfour Beatty have projects in the city, as do engineers Arup, WSP and Buro Happold.

It is understood Manhattan’s district attorney has opened a criminal inquiry into whether the crane’s turntable had been damaged last year and then illegally put back into service.

For more on crane safety go to www.building.co.uk/saferskyline