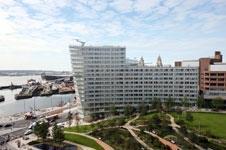 CB Richard Ellis, Westfield and Liverpool One among winners at retail awards in Cannes

UK firms and projects have dominated this year's MAPIC awards, winning four out of the seven categories.

The awards, held last night in Cannes, are to celebrate retail schemes and the firms behind them in 2008/09.

The winning entries from the UK were:

Other winners included Germany for the best sustainable retail development of the year, Multi Corporation bv from the Netherlands as developer of the year and KidZania won best concept of the year for Mexico.