Development of North West Bicester to start later this year 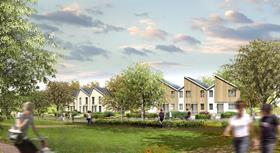 The development will initially see 393 homes built to level five of the code for sustainable homes on a 50 acre site. A total of 40% of the land will be left open for green space.

The development will include the UK’s largest residential solar array to generate electricity, a district heating system and charging points for electric vehicles. Work on site is due to start later this year.

Steve Hornblow, project director for A2Dominion, said: “As we prepare to begin work on the first exemplar phase later this year, and with a highly experienced consultant team in place, A2Dominion is looking forward to also advancing the masterplan for the wider site, with much already being done in tandem with the development of exemplar.”

The development, which will have 30% of its homes set aside for affordable housing, will also include building a school and an eco business centre.

The North West Bicester development is the first of four sites for planned eco towns in the UK which include St Austell and Clay Country eco-communities in Cornwall, Rackheath eco-community in Norfolk and Whitehill Bordon eco-town in East Hampshire.

Sally Coble, area environment planning and engagement manager at the Environment Agency said: “This is just the beginning. Schemes such as this show that sustainable development is possible and should be replicated across the country.”