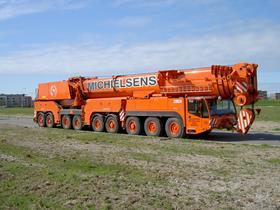 Unite has said the government “must stop hiding behind cost concerns” after urging it to take action to ensure the safety of mobile cranes when they are driven on roads.

The trade union, which represents more than 100,000 construction workers in the UK, has written to Secretary of State for Transport Chris Grayling to recommend a compulsory testing and regulations system be introduced.

Currently, mobile cranes are exempt from requiring an annual MOT. Following a three year long consultation, the Department for Transport recently announced that it will introduce regulations that would require mobile cranes which are on an HGV chassis to undergo these safety checks.

However, Unite said that most mobile cranes are of the all-terrain variety and they will continue to be exempt from MOT testing as many of them are too large to fit into a testing centre.

It said that while it understands size considerations are an issue, it believes that a compulsory testing and regulations system must be introduced in order to improve safety and to reassure both drivers and other road users the vehicles are roadworthy.

The trade union is also calling on the government to introduce a tachograph system to mobile cranes and other forms of major plant. These are devices fitted to a vehicle that automatically record information such as speed, distance and driver activity.

Unlike a lorry, these vehicles can be driven on the roads without restriction or the driver having to undertake mandatory breaks.

Bernard McAuley, national officer for construction at Unite, said: “Members of the public will be concerned that there are no rules ensuring that these large machines are roadworthy. Mobile crane drivers need to know that they are in a safe vehicle.

“It is also totally wrong that drivers are currently allowed to drive these cranes for hours on end without any requirements to have a break. This is dangerous for both the driver and other road users.

“The government must stop hiding behind cost concerns and hoping the industry will introduce voluntary regulation. The only way to improve standards and safety is through statutory testing and clear rules on driving time.

“Chris Grayling must re-think the government’s response. Too often we have seen how penny pinching on safety matters has terrible consequences and we should ensure this is not the case with regards to mobile cranes, including the all-terrain variety.”