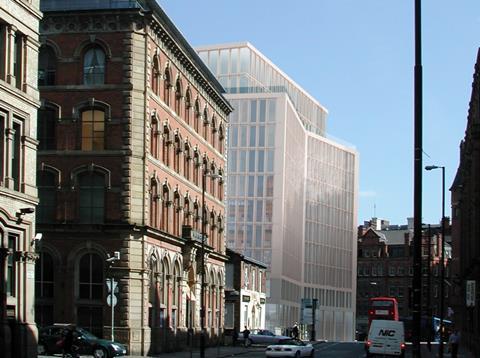 Developer Urban & Civic has revealed reworked plans for an £80m commercial and housing scheme in the heart of Manchester city centre.

Urban & Civic bought the site on the corner of Princess Street and Whitworth Street at the end of last year, which had planning permission for a mixed-use scheme and was part-built-out with foundations for three buildings and a four-level basement car park, but abandoned in 2008 during the financial crisis.

The new plans, designed by architect Simpson Haugh, comprise two apartment buildings comprising 240 flats, a four star plus hotel, ground floor retail and restaurants and a landscaped public square. The plans were revealed at a public exhibition this week and it is expected to go in for planning later this autumn.

Urban & Civic said its reworked plans presented an “alternative scheme that is more in keeping with current aspirations”.

As well as developing the site, Urban & Civic plan to retain the long-term management of the site.

Commenting on the new designs, Urban & Civic said: “Although the consented scheme could still be developed, the economy and property market, as well as thinking on design and uses for the site have changed since planning permission was granted in 2007. This has provided Urban & Civic with a rare opportunity to present an alternative scheme that is more in keeping with current aspirations.

“The reworked design seeks to create a contemporary reinterpretation of the historic contextual buildings within the Whitworth Street Conservation Area. The lower blocks of each building respect the street and canal frontages, while upper blocks are set back at heights related to eaves and ridgelines of adjacent buildings. Roof terraces created as a result of this approach will provide amenity spaces for the upper level apartments.

“A simple, expressed glazed terracotta grid is proposed to the street-facing elevations of all three buildings to create an ordered façade, which references the faience (glazed ceramic) used extensively on the facades of nearby historic buildings. The tones and colours proposed respond to the red brick and terracotta to Whitworth Street and Canal Street, and the sandstone tones to the ‘palazzo’ warehouse buildings along Princess Street.”

Andrew Lavin, development manager for Urban&Civic said: “Our reworked scheme comprises a high quality, mixed-use development consisting of three buildings sitting over the existing four-level basement car park. Our vision is to create a vibrant development that complements and enhances the historic context and sensitively reconnects the site to its surroundings.

“We believe the introduction of retail and restaurant units on the ground floor level showcasing some of the City’s finest and most eclectic artisans along with a landscaped public square will help reinvigorate and re-energise this part of the City.” 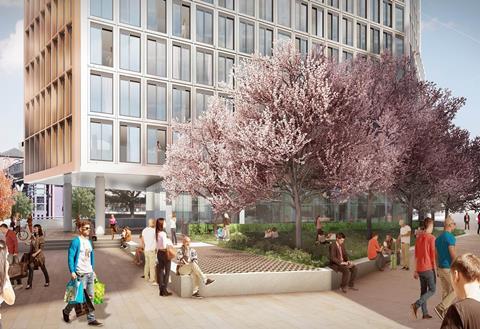