Proposals for a £750m regeneration in Swansea have taken a major step forward, with Urban Splash named as the council’s preferred development partner.

The firm has been picked to lead the redevelopment of a number of sites in the south Wales city, including the Civic Centre, Swansea Central north and a plot of land running alongside the River Tawe in the St Thomas area of Swansea. 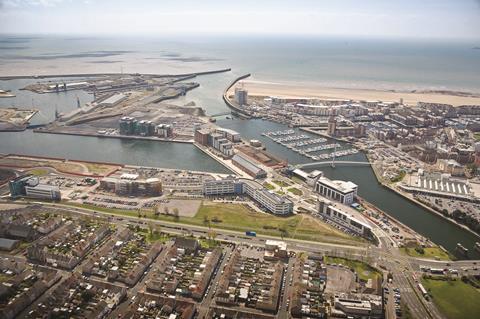 Early ideas for each site have been proposed, which will now be worked up in more detail.

These include the transformation of the 23-acre seafront Civic Centre site into a new mixed-use waterfront district that will include new homes, leisure and hospitality facilities and civic spaces.

They also include office buildings, apartments and shared workspaces on the 5.5-acre Swansea Central north site, which is located at the former St David’s shopping centre, and a residential-led regeneration of a 7.5-acre riverfront site in St Thomas, featuring family homes, apartments, public spaces and a new terraced river walk.