Vinci’s decision to be more picky around which jobs it took on helped sales across its UK building division rise by 7% to £429m last year. 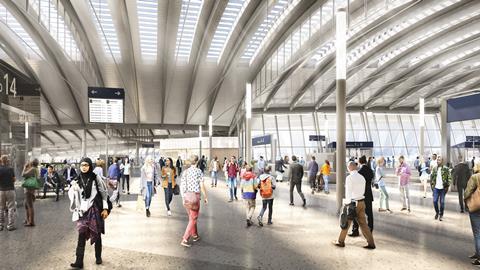 Towards the end of 2018, the French-owned group announced its UK construction arm would be taking “a more selective approach” to taking on new business.

In accounts posted on Companies House, Vinci’s UK construction business said the hike in the division’s revenue was mainly the result of securing significant new work in the north west of England, including work starting at the Royal Blackburn hospital and the Patterson building at the Christie hospital in Withington, Manchester.

Vinci’s civils business, which trades under the Taylor Woodrow name, saw sales slip 23% to £165m, with the blame being laid squarely on delays to the start of HS2. Together with Balfour Beatty and transport planning consultancy Systra, Vinci is signed up to build one of HS2’s key stations, Old Oak Common, in west London (pictured).

Its overall operating margin improved by six basis points to 1.8%.

In its outlook for 2020, Vinci warned uncertainties would remain around the manner of the UK’s Brexit deal negotiations.

The accounts, which were signed off on 5 March by chairman Jerome Stubler who took over from Bruno Dupety last year, made no reference to the coronavirus pandemic.