Vinci to cut over 100 jobs after consolidation 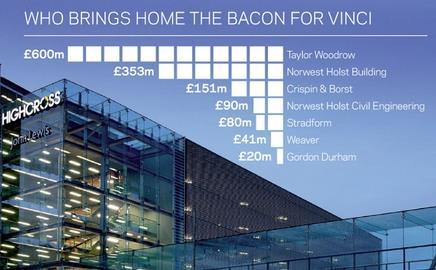 The figure represents more than 3% of its 3,200 staff. John Stanion, chief executive of Vinci UK, said the recession had been the main factor behind the consolidation, which was announced last month.

It will lead to the merger of accounting, HR, insurance, IT and fleet management services across the divisions, which include Taylor Woodrow, Norwest Holst and Stradform.

Stanion said: “Having that sort of duplication across the company was not sustainable going into a fairly deep recession.”

He said there would be no office closures but added that “almost everything” would now operate out of its Watford head office with a small number of functions based in north-west England.

The company will retain the divisions’ trading names.

Despite the redundancies he said the integration of Taywood had been “excellent” since its £74m purchase from Taylor Wimpey last September. He said: “The company is bedding in well. It was a great fit and pushes us into transport infrastructure which is a key area for us.”

But he warned that delays on public sector projects would hit the construction industry in 2010 and beyond. “We’ve seen projects slip in the further education market, particularly deals driven by land sales. It’s a big concern because we’ve never had this combination before of a recession coupled with a credit crunch.”

Stanion said that the speed of the decline was making it difficult to take strategic decisions but the company would continue its push into the waste, nuclear, health and education markets.