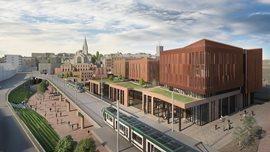 Wates Construction has been appointed to build the £58m City Hub building for Nottingham College.

The job, which was procured via Scape’s national construction framework, will include facilities such as a restaurant, cafe, and new performing arts centre.

The City Hub will be built on disused brownfield land next to the Broadmarsh Centre in the city centre and will form part of a council run scheme to regenerate this part of Nottingham.

John Carlin, business unit director, Wates Construction Midlands, said: “As well as being a superior facility for students, the hub will also be of excellent use for community groups and the business sector and will play a key role in creating a new destination within the city centre.”

The City Hub’s £58m cost is due to be covered by a £18m loan from Nottingham City Council, college funds and £30m from D2N2, the Local Enterprise Partnership for the Nottinghamshire and Derbyshire area.

D2N2 agreed to fund the project in the last week of March.