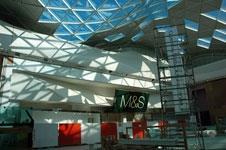 Westfield has delayed UK shopping centres worth £1.2bn and started a wave of redundancies as the economic downturn takes its toll on retail development.

It is understood that the Australian developer, one of the sector’s biggest clients, has put back the start of its £700m Nottingham Broadmarsh scheme, the £320m Bradford Broadway development and a £140m extension to The Friary in Guildford.

The extent of the delays is unclear; however, one source close to the company said the firm did not realistically expect to start construction work on its programme until the “back end of 2010”.

The expected start dates of these projects have never been announced, although local press reports from Bradford say that scheme, where enabling works have taken place, was expected to achieve completion in 2010. Westfield is understood to have alerted consultants and firms within its supply chain that the pipeline of work will come on stream later than anticipated.

The firm’s £1.45bn Stratford City development, where it is currently on site, will continue as planned for a 2011 opening although it is believed the firm is considering reconfiguring its fit-out timetable.

The developer, which completed the £1.6bn Westfield London shopping centre at White City in October, has instigated a wave of redundancies. It is believed that up to 80 people from its design and construction division could be affected, together with almost 100 freelance workers.

A Westfield spokesperson confirmed that the company was carrying out a redundancy consultation. He said: “Following the completion of Westfield London, we are currently reviewing our resource levels. We are in the middle of a consultation period so it is too early to confirm the full outcome. However, some reductions to our current staff are anticipated.”

He added: “We are committed to all our developments in the UK.”