Willmott Dixon has been appointed to deliver a £31m extension to Birmingham City University’s Curzon Campus, which the firm completed last year.

The 9,200m2 Curzon B development will expand the universtity’s city-centre campus and include accommodation for 3,000 students, a lecture theatre and mock law courts.

Willmott Dixon said the latest appointment meant the firm would have worked on nearly £150m of projects for the university since 2011.

Peter Owen, managing director of its Midlands business said the project would make Birmingham the “university capital of England”.

Curzon B was designed by Associated Architects and is due for completion in time for the start of the 2017 academic year. 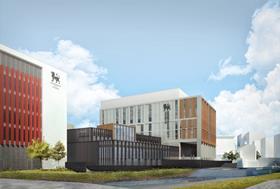 Street-level view of Birmingham City University’s ‘Curzon B’ development, which will be built by Willmott Dixon 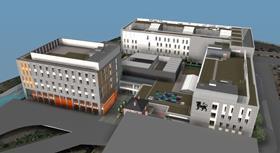 Rear view of Birmingham City University’s ‘Curzon B’ development, which will be built by Willmott Dixon