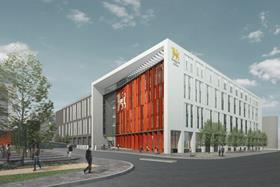 The new campus, located in the city centre at Eastside, adjacent to Millennium Point in the heart of the city, is part of the university’s

£180m investment in its estate.

Phase two will feature a student support hub as well as a new library, teaching and IT space, plus other student-facing support faculties.

With construction starting in June, the company expects £28 million of the build cost to go on sub-contractor packages delivered by firms located within a 20-mile radius of the project.

Willmott Dixon also built phase one of the University’s masterplan, which features an integrated creative and media hub supported with pioneering technology.

Peter Owen, managing director for Willmott Dixon in the Midlands, said: “As a local company we take seriously our responsibility to support growth and sustain jobs in Birmingham.

“Our recent investment in the 4Life Academy is an example of this commitment.

“Now we have been appointed for phase two of Birmingham City University’s City Centre Campus and we’ll work with local companies to ensure they benefit from this huge investment.”