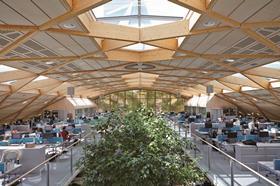 Willmott Dixon has announced plans to halve its carbon emissions intensity by 2020, claiming there is a “clear link” between sustainability and financial success.

The firm, which says it has been carbon neutral since 2012, says it plans to cut carbon emissions intensity - which is emissions relative to turnover - in half by 2020, using 2010 as a base year.

Willmott Dixon said it is finalising a new energy and carbon management strategy that will set out how to cut further carbon.

Willmott Dixon says emissions in 2010 totalled 18,150 tonnes and its emissions intensity was 18.3
tonnes CO2e. By 2020, it aims to reduce the amount of emissions the firm produces per £1m of turnover to 9.25 tonnes CO2e.

He said: “There is a clear link between being commercially successful and being sustainable; cutting carbon boosts the bottom line. As a result of implementing our previous carbon management plan, we are now saving around £3m a year in fuel and energy costs.”