Wolseley reports profit down by two-thirds 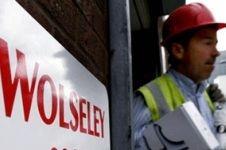 Building materials giant Wolseley has issued a gloomy trading update for the five months to 31 December 2008 but said it will not breach banking covenants this month.

It said pre-tax profit fell two-thirds over the period and turnover was down 3%.

A statement said: “Against the background of deteriorating trading conditions and volatile financial markets, the group will continue to concentrate its near term operational actions on enhanced cash generation and cost reduction.”

There was no news on an estimated £500m rights issue that would bolster the balance sheet and give the group a war chest to take advantage of the recession to make acquisitions.

Instead it said it will “continue to evaluate all of the options and implement the actions necessary to position the balance sheet appropriately for the medium term”.

The group made 7,500 redundancies last year in an attempt to cut costs and ensure compliance with banking covenants.

Despite the uncertainty, Building revealed last week that sources close to the group's lenders were confident that covenants would not be breached at the end of its financial year in July.

News on a rights issue is expected in the short term.