Site cordoned off awaiting investigation by Health and Safety Executive 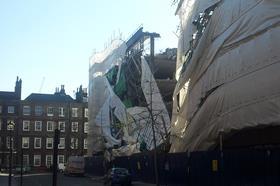 Work on a site at which Keltbray was undertaking demolition in Holborn has ground to a halt until an inspection team from the Health and Safety Executive can ascertain the cause of the building’s collapse yesterday afternoon.

Over a hundred workers were evacuated from the building site and a further 100 people from nearby premises including the London School of Economics when part of a building collapsed at 16:14 on Monday.

Keltbray said it was working on the building and conducting a top-down demolition when the uncontrolled collapse occurred, pulling down scaffolding surrounding it.

Paul Deacy, managing director of Keltbray Demolition & Civil Engineering said: “We can confirm there has been an incident at Portugal Street, where Keltbray was working on the demolition of a building when part of the building and scaffolding collapsed.

“One man has been taken to hospital with non-life threatening injuries. Fortunately nobody else was hurt. Emergency services were immediately called to the scene and all people in the vicinity were evacuated. All operations on site have been suspended while we work with all the relevant authorities to investigate and fully understand the circumstances of the incident.”

Around a dozen workers were among those waiting outside the cordon around the building and the eastern end of Portugal Street this morning with the site still closed. Speaking to Building, one worker at the scene said that they were awaiting the HSE to arrive and investigate the cause and extent of the collapse.

London Fire Brigade station manager John Snelgrove, who was at the scene yesterday, said: “When the first crews arrived they found the building, which was under refurbishment, had collapsed between the fifth and second floors.

“Firefighters gave first aid to an injured man on site until ambulance crews arrived and also helped police put safety cordons in place and to evacuate people from the immediate area.”

The incident was handed over to the police at 17:17. Two fire engines from Soho, three fire rescue units from East Ham, Edmonton and Heston and around 30 firefighters and officers attended the incident.