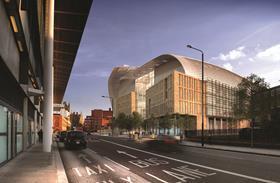 Police officers believe they know who the deceased, believed aged 31, is but they await formal identification. Next of kin have been informed.

The man had stopped breathing when a medical team arrived, and was pronounced dead at the scene at around 5.40pm.

A post mortem examination at the Whittington Hospital on 8 November gave the cause of death as serious internal injuries.

Laing O’Rourke confirmed the man was a construction worker with one of its subcontractors.

“The thoughts of Laing O’Rourke and the entire Francis Crick Institute project team are with the family and colleagues of the deceased at this time. While investigations are continuing, it would be inappropriate to comment further or speculate as to the cause.”

Union Unite put out a statement saying it had not been allowed access to the site by Laing O’Rourke.

Unite assistant general secretary Gail Cartmail said: “This fatality is a tragedy and our condolences go out to the bereaved’s family and friends.

“This is a harsh reminder of the importance of high standards of health & safety in an industry that is extremely dangerous. Trade unions have a role to play in maintaining safe working environments but Laing O’Rourke has bizarrely banned Unite officials from their sites.

“There is no place for anti-trade union behaviour in an industry where we should be working together in the interests of safety.

“We urge Laing O’Rourke…to give Unite access to the sites to support workers and help make improvements where necessary.”

A spokesperson for the Health & Safety Executive confirmed they were investigating the incident with the police. The Met said the death was not being treated as suspicious and there had been no arrests.

The site closed following the incident and reopened today (11 November).

Laing O’Rourke was awarded the project to build a UK Centre for Medical Research and Innovation for the Francis Crick Institute in March 2011. It is due for completion in 2015.