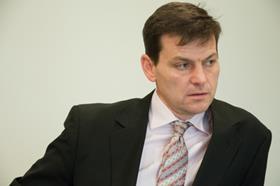 Engineer WSP has made a string of senior hires and promotions in the UK, including promoting Tom Smith to become global director for property and buildings.

Smith (pictured) has been at WSP for 20 years and has previously held senior positions in the UK, Middle East and India.

WSP said Smith, as part of the executive team, “will now focus on WSP’s strategic goal of being recognised as the leading property and buildings consultancy by 2015”.

WSP has also hired Julie Carrier from Amey to head up its rail business and Peter Lloyd from Aecom as a senior technical director responsible for the Manchester and Leeds offices of WSP’s building structures business.