The consultants have been awarded the programme, project and cost management role on the project 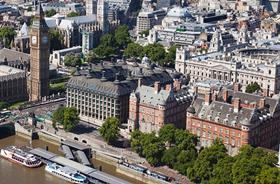 WSP Parsons Brinckhoff has confirmed that they and consultant Gleeds have been awarded the programme, project and cost management role on the £500m revamp of MPs’ offices in Westminster, known as the Northern Estate Programme, which Building revealed earlier this week.

The team beat rival bidders Turner & Townsend, Arcadis, a joint venture between Mace and Aecom and a team featuring Lendlease to the role.

The works include the restoration of the grade I-listed Norman Shaw North and grade II-listed Norman Shaw South buildings - both of which are now over 100 years old - along with 1 Derby Gate and 1 Parliament Street - a pair of grade II-listed adjoining buildings dating from the 1880s. In total around 15,300 sqm of office space will be refurbished.

Architect BDP scooped the lead design role on the project last month while Aecom picked up the engineering role on the programme. Procurement for a main works contractor for the Northern Estate will start early next year with the renovations due to complete in the early 2020s.

The programme also includes works to Richmond House, currently occupied by the Department of Health, which is the proposed new temporary home for the House of Commons while £4bn restoration works are carried out to the Palace of Westminster.

The Northern Estate Programme could be combined with the Palace of Westminster works at a later date, after a joint committee of MPs and peers recommended the jobs be managed together in September. Building understands the client panels overseeing both programme of works have already started meeting together as they start to collaborate more closely.

Labour MP Chris Byrant, the parliamentary joint committee member and spokesperson for the restoration of the palace, said at an event at the Palace of Westminster last month that MPs and their staff would likely temporarily occupy Richmond House while refurbishment work is carried out to other buildings in the Northern Estate, prior to it being occupied by the House of Commons.

Bryant said the Department of Health was in the process of moving out of the building and that the Commons were close to securing and that it was hoped the works to the Northern Estate buildings including grade I-listed Norman Shaw North and grade II-listed Norman Shaw South buildings, along with 1 Derby Gate and 1 Parliament Street and Cannon Row residences, would be underway by the end of this parliament.

WSP Parsons Brinckerhoff project director David Luscombe said: “This is a fantastic opportunity to bring a key part of the Parliamentary Estate up to the standards of a modern office environment. Refurbishment on this scale hasn’t been carried out for decades, so these much-needed upgrades will respect Parliament’s heritage whilst ensuring future generations can continue to work at the very heart of UK politics.”