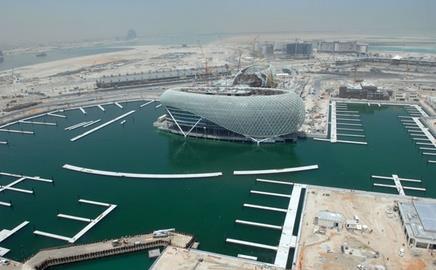 £115,000m² centrepiece of development that will host Formula One was flooded with 150 million gallons of water this weekend

The marina on Abu Dhabi’s Yas Island was flooded successfully with 150 million gallons over the weekend. The 115,000m² marina is the centrepiece of Aldar’s island development, which will host the inaugural Formula One Etihad Airways Abu Dhabi Grand Prix on 1 November. Motor racing fans will be able to watch the action on the circuit from boats, as the track sweeps past the marina. The news follows Aldar announcing last week that it was reviewing its £13bn Al Raha Beach scheme. The developer said it was reviewing several schemes inside the beach development, including the Al Seef waterfront community scheme due to market conditions.

Paul Lane, project director, said: “The Yas Marina is the perfect flagship project for Aldar Marinas as we welcome the world to Yas Island this coming November. Marinas are a salient feature of the world- class waterfront communities Aldar is building at various sectors of Abu Dhabi coast.”