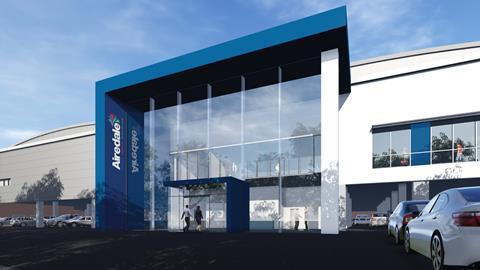 A computer-generated image of the new Airedale International factory BAM is to construct in Leeds.

Bam Construction has won a £25m contract to build a new factory for cooling-systems specialist Airedale International and £19m offices for insurer Hiscox in York.

Coupled with three other contracts expected to be announced in the coming weeks, the constractor said the Yorkshire wins amounted to a new-work total in the region of £100m.

The Airedale International contract will see 21,580 square metre footprint building constructed in Leeds to replace a facility that was damaged by fire in September last year.

The Hiscox offices were designed by Make Architects and cover around 4,600 square metres over four floors.

Construction on both projects is due to start in July for completion next year.

“Airedale showed tremendous determination in getting back to business as usual so quickly, and has some hard-hitting plans for future growth in the UK and globally,” he said.

“We will use all our skills and experience to help them into a new era.”

Pollard added that the firm’s latest wins in the region were a vote of confidence.

“These are complex projects and it is a really good sector to have established ourselves in, with investment beginning to flow again since the recession,” he said.