Zaha's 2012 aquatics centre gets a roof 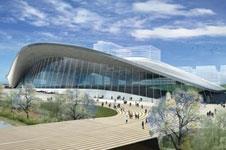 ODA announces the start of process to lift the 2,800-tonne, wave-shaped roof

The process has begun to lift the roof of the Zaha Hadid-designed Olympic aquatics centre into place.

The 2,800 tonne, 160m-long wave-shaped roof will eventually rest on two concrete supports at its northern end and a supporting wall at its southern end.

A 70-tonne steel truss has been put in place on top of the southern wall and more will be assembled in coming months, the ODA said.

ODA chief executive David Higgins said: “The lift of the sweeping wave-shaped roof is one of the toughest construction and engineering challenges on the Olympic park and will showcase the world class expertise involved in delivering the venues and infrastructure for London 2012.”

Zaha Hadid added: “This is a key milestone in the construction programme we have been looking forward to since winning the 2004 competition. The roof of the aquatics centre reflects the fluidity of water and will provide an inspirational legacy for all Londoners well beyond the 2012 Games.”

The foundations of the venue are complete and work will begin on the pool structure once the steel roof is complete, the ODA said.