In 2011, the government’s localism agenda looked as though it could drive down the number of housing schemes 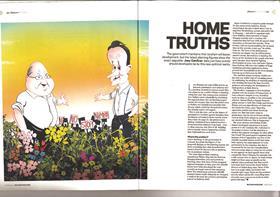 A potential resurgence in the number of council houses being built - with large projects being earmarked in several London boroughs - is the focal point of Ike Ijeh’s piece on page 42 of this week’s issue.

Four years ago, things were looking less positive for housebuilders, as the government’s localism agenda looked as though it could drive down the number of housing schemes. Scottish housebuilder Cala - unsuccessfully - challenged Eric Pickles’ abolishing of regional plans that set housing targets across the country. Reporting on what impact this could have on the sector, Joey Gardiner wrote: “Cala’s challenge to the government is unusual, but given the impact of the proposed changes to the planning system, it’s more surprising that other housebuilders haven’t joined in. Because this is anything but an academic debate.

“The latest figures from planning consultancy Tetlow King and the National Housing Federation show that since Pickles scrapped regional strategies in May, plans for 216,459 homes have been abandoned by local councils no longer coerced into accepting them.”