This week, Britain commemorated the centenary of its entry into the First World War. See our article from 1914 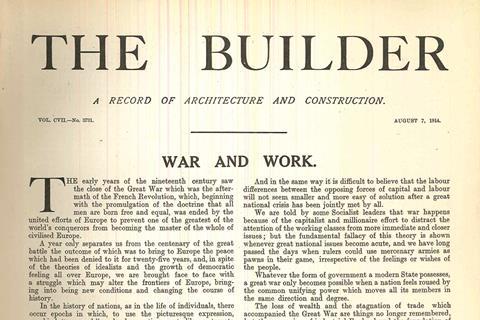 This week, Britain commemorated the centenary of its entry into the First World War. With the global conflict centred in Europe, nobody could accurately predict what effect the fighting would have on life and industry for those back home in Britain. On 7 August 1914, Building - then known as The Builder
- opened with an address to readers, profiling the history of European war, its politics and philosophies.

While predominantly focused on the politics of the fighting itself, the leader did question what impact the conflict, particularly the severed international ties, could have on the construction industry. It read: “We cannot yet tell what effect the present situation may have on the internal trade of the country, and more especially on the great industry of building. We shall probably have to face a certain restriction of activity in the field of building of a more or less speculative character; on the other hand, we should expect to see greater harmony prevail between the rival forces of labour and capital. […] Nor shall we be able to import foreign building material with the usual freedom. Our timber supply may be partially curtailed or raised in price, and, if so, an additional impetus will be given to fireproof construction and methods.”