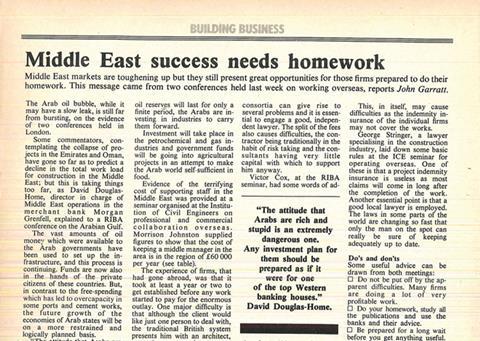 As we report on the possible impact on British projects of Qatar’s tensions with its neighbours, we look back to a time when UK businesses feared Middle Eastern markets were getting tougher, writes Helen Burch.

In 1977, John Garratt reported that there was still much opportunity for British companies as “the Arab oil bubble, while it may have a slow leak, is still far from bursting”.

David Douglas-Home, of bank Morgan Grenfell, advised firms never to underestimate Middle Eastern clients (in rather blunt terms) and to treat every investment plan “as if it were for one of the top Western banking houses”.

One downside noted was the cost of sending staff abroad. Employing a middle manager living with their family in Oman for a year was calculated to cost £60,000 - £261,000 in today’s currency.

Other advice didn’t exactly fill the reader with optimism - being prepared for a long wait before anything useful happened, ensuring contacts were genuinely influential and the importance of hiring a good local lawyer and independent lawyer.

But, said Garratt, “do not be put off by the apparent difficulties”. Very reassuring.

To read the full article from 1 July 1977, download the PDF below