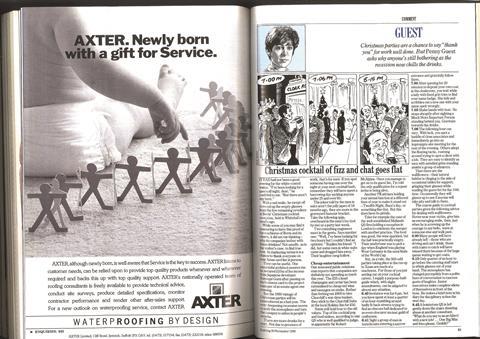 It is, so we’re led to believe, the most wonderful time of the year. And when crooner Andy Williams penned his 1963 festive hit, we’re sure on some level he was referencing the season’s influx of office parties and Christmas cocktail receptions. But in 1990, Building columnist Penny Guest had noticed a lack of quality spirit and quality spirits at recent seasonal functions, due in part to the industry being rocked by recession.

Writing on 30 November 1990, she said: “One seasoned public relations man reports that companies are definitely not spending as much this year. The £25-a-head champagne and cavier has been rationalised to cheap red wine and sausages on sticks. Rather than forking out £800 to hire Churchill’s war-time bunker, they stick to the Churchill Suite at the local Holiday Inn for £50.
“Some still hold true to the old values. Top of the cocktail pop and food stakes, according to one QS who is well qualified to judge, is apparently Sir Robert McAlpine. Once you manage to get on to its guest list, I’m told the only qualification for a repeat invite is being alive.”