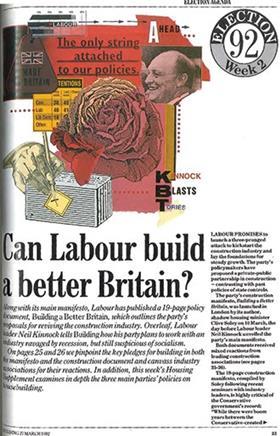 Can Labour build a better Britain?

It may have escaped your notice, but in a few weeks’ time Britain will be heading to the polls to decide on whether the country should be governed under a shade of blue, red, yellow, purple, green or some murky blend. As each party begins to draw its battle lines on construction, we take a look back to the 1992 election, when Labour leader Neil Kinnock spoke directly to Building, following the publication of his party’s Building a Better Britain construction manifesto. The manifesto aspired to repair an industry that had been bruised by recession, and which was dealing with the problems of skill shortages and underfunded training.

When asked: ‘What can the industry expect from a Labour government that it won’t get from the Tories?’ Kinnock responded: “I think we need a special issue of your journal to outline this. In short, we will phase the release of capital receipts - which everyone in the industy wants. We will invest in infrastructure and start to repair our schools and hospitals. We will move towards a regime of stable interest rates.

“We will enable better long-term planning of public projects, to allow the industry to gear up for expansion. We have a real commitment to training the workforce.”