Unlike people, who we are told can never be too rich or too thin, companies can suffer from being too successful and spread too thinly. 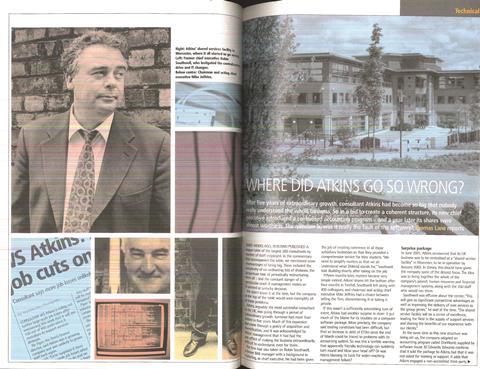 Where did Atkins go so wrong?

Unlike people, who we are told can never be too rich or too thin, companies can suffer from being too successful and spread too thinly. As we look at Carillion’s prospects this week, Building thought back to another business catastrophe involving a big name.

Many will remember consulting giant Atkins’ share crash, which was blamed on a failed attempt to centralise the business after the firm’s turnover trebled in five years through a program of acquisition and diversification.

Despite Atkin’s size and layers of management, the company blamed its woes on something that anybody who has ever worked in an office will understand: IT issues.

The firm had installed new accounting software in a shared services facility in Worcester and optimistically adopted a “big bang” approach that replaced the entire financial system at once. The company needed to invoice about £3m every day, and when this ground to a halt, it had a big problem.

IT director Joanne Stanford provided some handy tips for installing a new IT system, including the steps needed to design the implementation, testing the system and how to put it into use carefully.

If you want vintage tech advice from 25 October 2002, click on the pdf below.