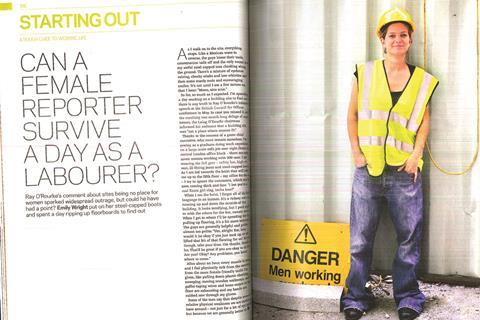 Can a female reporter survive a day as a labourer?

This month Theresa May walked into 10 Downing Street as the second female British prime minister and it left us wondering whether much has changed for women in the workplace.

Making up 11% of the construction workforce and 1% of workers on site, women are certainly the minority in our sector. We take a look back to 2006, when a female reporter posed as a worker on site to test the theory that only men could master the art of hard labour.

Emily Wright reported: “After about an hour, every muscle is aching and I feel physically sick from the exertion.

“Some of the men say that despite women’s relative physical weakness we are useful to have around - not just for a bit of eye candy, but because we are generally better at paying attention to detail. But if you can’t lift the materials, you become more of a hindrance than a help … just like I have. By 1pm, I’m saying: ‘Excuse me, can you lift this for me?’ for the 100th time and the smiles and understanding sighs are turning to eye-rolling and tutting.”