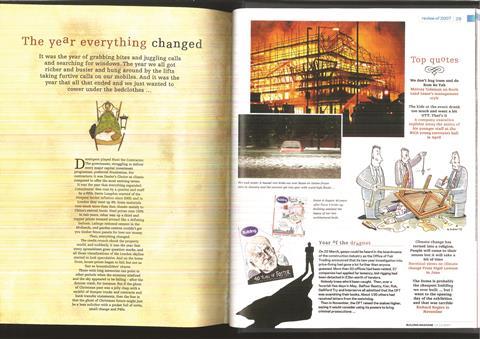 The year everything changed

A year that started out frantically busy came to a devastating end as the credit crunch hit and house prices fell. “The fear is that the ghost of Christmas future might just be a lean solicitor with a pocket full of writs, small change and P45s,” we wrote.

A prime minister who had been a friend to construction left the building. “Tony Blair deserves a raised glass,” said Tony Bingham, who had never voted for him.

Our readers were not impressed with the design for the Olympic stadium, nicknaming it “the Vol-au-vent”.

And some people apparently partied too hard at the RICS young surveyors’ ball. Whatever happened seems to have been lost in the mists of time, but it led one chief executive to say: “The kids at the event drank too much and went a bit OTT. That’s it.” If you attended this momentous event, feel free to share your memories with us …

To read the full article from 14 December 2007, click on the pdf below.