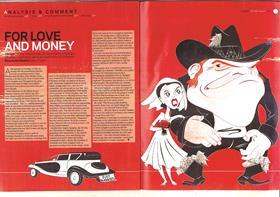 For love and money

Roses are red, violets are blue, I’m a US engineer, looking to merge with you. Okay, perhaps not the most romantic message that you could find scrawled inside your Valentine’s card this year, but in 2010 it wasn’t far off what was being conveyed to several UK consultants - with it predicted at the time that one in three were facing takeovers from stateside giants. No doubt feeling slightly uncomfortable at all the meaningful gazes and awkward flirting going on - with Davis Langdon and Aecom back then a rumoured couple to be - Building reporter Roxanne McMeeken did her best Cilla Black impression to see if she could find a match capable of going the distance, with potential deals, involving firms including EC Harris and Gardiner & Theobald, scored with their own love-o-meter ratings. Weighing up the advantages of a merger for UK firms, she said: “Despite their higher margins, the UK QSs are vulnerable to takeover, as they are grappling with unpaid fees in the Middle East, redundancy costs and falling fees, turnover and profit. Some are further weakened by debt. Others, like Gardiner & Theobald and Davis Langdon took on expensive headquarters at the height of the boom that may prove a struggle to maintain.”