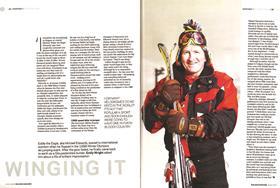 Five years ago, buoyed by the excitement of the Winter Olympics taking place in Vancouver, Building’s Emily Wright grabbed her salopets and headed for the nearest slopes she could find - which, inevitably, led her to Milton Keynes. She was also joined at the indoor ski slope by Michael ‘Eddie the Eagle’ Edwards, the once British ski jumper, whose last-placing in the 1988 Winter Games has become part of British sporting lore. Having hung up his goggles - professionally, at least - Edwards explained the motivation behind his move into building and property development, having come from a long line of builders. As Emily Wright reports:

“Working for myself as a builder means I can down tools at any moment to do PR jobs and them come back to things here with no fuss,” he smiles. “It’s just so flexible. It’s great.”

For now [Edwards] is focused on doing smaller roofing and building contracts for clients in his local area of Stroud. He enjoys the work but says he needs to be careful of time wasters. “Sometimes people call me out for a quote and it becomes clear it was just so they could meet Eddie the Eagle,” he says.