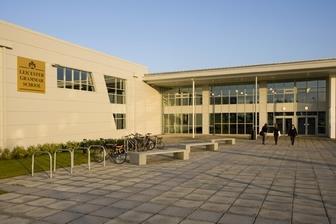 The consultancy claims the high levels of insulation, natural lighting and natural ventilation throughout the building have resulted in minimal energy usage.

Some of the older remaining buildings on the site have been incorporated into the predominantly modern design with feature cedar cladding. Where old buildings were beyond renovation, the materials were re-used as a foundation for roads and pavements.

The building has already opened its doors to pupils, but will hold its official opening in December 2008.